There are usually one or two points of interest in an Azed puzzle, and here we pick them out for comment. Please feel free to add your own questions or observations on any aspect of the puzzle (including clues not listed below) either by using the comment form at the bottom of the page or, if would prefer that your question/comment is not publicly visible, by email.

A new type of special to deal with this Christmas. At first glance I thought it was going to be quite tough, but Azed has given us a couple of early Christmas gifts across the top and bottom of the puzzle. The wordplay for 1a determines exactly how it must be entered in the grid; although the same does not apply to 36a, working out 1d (or at least the four-letter groups that start and end its entry) will narrow the possibilities down to two and the ‘hidden’ at 27d will confirm how 36 must be entered. The clues are largely straightforward and the proportion of unfamiliar words is relatively low, so just having the entry at 1a in place gets you off to a great start.

A cleverly-constructed puzzle for the final competition of the year. I wish all readers a splendid Christmas and a happy, healthy 2022 with plenty of good solving to entertain them. 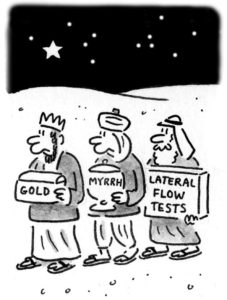 Setters’ Corner: When setting a themed puzzle, and in particular when asking solvers to enter a word which must be deduced simply from a number of checked letters, it is vital that there should be no ambiguity. I think the correct entry for 20a here would have been pretty clear anyway, but Azed has sensibly taken the extra step of indicating that it is a verb form, thus ruling out the only conceivable alternative (a noun ending in R). There are few things worse as a solver than getting to the end of a puzzle and not being sure whether you’ve actually completed it correctly, and it is the setter’s job to ensure that this does not happen.

Notes on some of the clues follow, and below them is a checklist of where the breaks in the entries appear.

1a Seasonal postal item: cosmetic colouring mostly damaged shirt (about 600) (13, 2 words)
The wordplay (and hence the entry) can be reverse engineered from the ‘seasonal postal item’: a seven-letter ‘cosmetic colouring’ without its last letter (‘mostly’) and an anagram (‘damaged’) of SHIRT, containing between them (‘about’) the Roman numerals representing 600. Getting this one into the grid fixes the first letters of the first ten down entries, a huge leap forward.

13a Splosh, reverse of fitting, cut short within (7)
A three-letter adjective meaning ‘fitting’ is reversed around a five-letter word for ‘short’ (or ‘succinct’) from which the last letter has been removed (‘cut’).

17a Assault rifle – I rage following pain (8)
The letter I and a four-letter word meaning ‘to rage’ or ‘to move or act with violence’ are preceded by a three-letter word for ‘pain’ or ‘sickness’ taken directly from French.

31a Pike to disentangle? Special net required (6)
A three-letter dialect word for a pike (of the swimming around eating other fish sort) is followed by a three-letter word, common in barred puzzles, meaning ‘to disentangle’ or ‘to tidy up’.

34a Member of staff, one opposed to inaction having retired (7)
A two-letter word meaning ‘one’ is followed by a reversal (‘having retired’) of the usual single-letter representation of ‘opposed to’ plus a four-letter word for ‘inaction’.

35a I’ll be replaced by soprano in psalm voice in certain parts (6)
A six-letter name given to Psalm 95, on account of its first word when rendered in Latin, has the I replaced by the standard abbreviation for ‘soprano’. The ‘in certain parts’ reflects the fact that the solution is given by Chambers as ‘now dialect’.

36a This time accepting church mass it tried being converted (13)
Azed’s second little gift to solvers, an anagram (‘being converted’) of MASS IT TRIED containing (‘accepting’) a two-letter abbreviation for ‘church’.

3d Thinks force must be limited to opportune time locally (5)
The usual single-letter abbreviation for ‘force’ together with a four-letter dialect word meaning ‘opportune time’ or ‘good fortune’ which has several alternative spellings and pops up regularly in Azed crosswords.

5d Sacred plant representation depicted in artistic diploma (5)
A three-letter word for a representation, such as the magical document which showed every detail of Hogwarts school down to the last ghost, inside a two-letter abbreviation for ‘Diploma of Art’

7d There’s a dash of alcohol in this tea (4)
The first letter (‘a dash’) of ‘alcohol’ is placed inside a three-letter Latin pronoun meaning ‘this’.

8d Ingredient in veggie cookery, concentrated, without a name (6)
A seven-letter word meaning ‘concentrated’ or ‘extreme in degree’ has one of its Ns removed (‘without a name’). The solution is a food made from gluten, although the normal spelling these days appears to have an A as the fifth letter rather than (as here, and as in Chambers) an E.

9d As I changed inside that will do as an alternative (5)
An anagram (‘changed’) of AS I inside a two-letter word for ‘that will do’ (as an expression of approval).

22d Our set was working with special retort (6)
A charade of a two-letter term for ‘our set’ (ie you, I and perhaps some others), a three-letter word for ‘was working’, and the standard single-letter abbreviation for ‘special’.

23d Tasty slice of delicatessen consumed in Italian city (4)
The first letter (‘slice’) of ‘delicatessen’ is contained by (‘consumed in’) an Italian city that one might be inclined to visit. Why Azed has chosen ‘slice of’ rather than ‘slice from’ I’m not at all sure.

30d Scots bury beloved, end given priority (4)
A four-letter word for ‘beloved’ has the last letter moved to the beginning (‘end given priority’). The solution is a variant spelling of a Scottish word, but this form is given by Chambers as an alternative only for the noun, with the verb ‘yird’ given neither alternative spellings nor any indication of localization. However, based on the OED entries for the noun and verb forms of ‘earth’, supported by confirmation from a correspondent that his Scots dictionary has the solution here as meaning ‘to bury’, I am inclined to suspect that both the alternative spellings and the Scots attribution should in fact be applied to the headword in Chambers rather than specifically to the noun.